One strand of story for our time 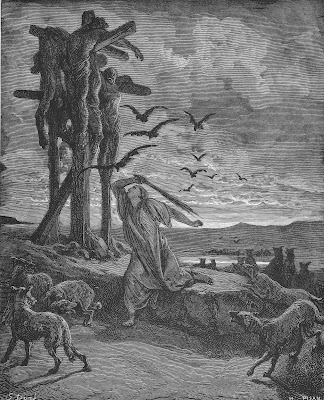 There is a story, not widely retold, which seems almost familiar in a world in which an absolute monarch can make potentially disruptive members of the royal family disappear, in which dictators can achieve extra judicial executions abroad, in which the commercially powerful can normalise their own sexual exploitation of others, in which mafias can prolong blood feuds.

A strong aggrieved minority group saw an opportunity to lynch the family of a defeated ruler who they said had once sought their genocide.  The new tyrant was happy to collude; he might have been keen both to win their public favour and to be able to eliminate potential rivals in the process.  Seven men were strung up.  Two were sons of the defeated ruler by one of his sex slaves; her potential use by others had been bid for as soon as he had fallen from power.  Five were grandsons of the defeated ruler, whose mother the new tyrant had once been promised as a wife but who had then married another man becoming the mother of the sons the new tyrant was now able to have slain.

The seven bodies were left exposed, destined to be slowly devoured as a spectacle.  But one of their endlessly exploited mothers set camp at the foot of the gallows and day after day drove off the wild animals which approached.  So the new ruler felt obliged to do one dignified thing.  He gathered the human remains, and also the remains of both the defeated ruler and his much loved son, and arranged their proper burial.

And the re-telling of this story centuries on was recast as one of non-violent resistance of the exploited and abused - risky dignity in the face of oppression, shaming the tyrant into treating the oppressed as human just this once .

Only a possible hint in the story, that human sacrifice might ensure a good harvest, seems strange to us – the new tyrant’s desperation at a prolonged famine had led him to consult with the potential victims of his predecessor’s supposed attempted genocide.  It was also actually a threshing floor which he would soon buy as a place on which to build an altar, the site for a future sacred shrine for his own regime, bringing a plague to an end by doing so.

The story is in 2 Samuel 21.  One of the options for an Old Testament reading at a principal Sunday service this time next year is to read over seven weeks some episodes of the regime of this new tyrant (King David) in 2 Samuel, but this story is never included (nor, more strangely, that of the first foundation on the site of the Jerusalem Temple).  It is also another of the passages skipped over altogether in the pattern of daily readings for Morning and Evening Prayer as well (although 2 Samuel 24’s account of David buying the threshing floor is read at one service each year).  So there is no particular reason why even the most diligent daily church attender should be aware of it.

This is despite the way there have been periods when the story has been better known by Christians.  Their interpretation of the Hebrew scriptures was sometimes focused on any hint they could find of a story which paralleled that of Jesus.  So they noticed ‘we have no right to put anyone to death’ (2 Samuel 21.4 and John 18.31) and ‘he handed them over’ (2 Samuel 21.9 and John 19.16) and saw this as a deliberate foretaste of Jesus’ execution, also on a hill.  It is striking to me that the nineteenth century French engraving by Gustav Dore, which I found on WikiCommons to illustrate this post, shows the lynching to be by crucifixion, somehow reflecting Mary at the foot of Jesus’ cross.

A different picture of Rizpah driving off birds of prey popped up in a biblical art social media stream the other day, so she is certainly not totally over looked today.  It was what made me remember what was actually Allan Boesak (the South African Reformed Church minister, liberation theologian and anti-apartheid campaigner) reflecting on the story in a ‘Biblical Texts in Context of Occupation’ collection.

So, once again, I see Rizpah is each mother, wife or daughter of the disappeared or assassinated or casually state-murdered standing out for the dignity of their sons’ lives which mattered and matter, taking what is sometimes the great risk of shaming the overwhelmingly powerful.
Posted by Peter Mullins at 10:46