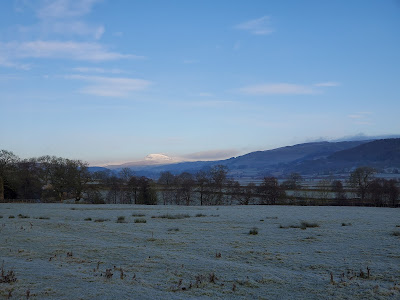 The section of Mourid Barghouti’s poem Midnight (which she had marked in the copy by our bed) read at Deborah’s funeral yesterday:

And the view of the sun on the snow on Pen-y- ghent today (taken by one of her sons from the edge of the site in which she had just been buried).
Posted by Peter Mullins at 17:09

In searching for a picture of the image of St. Mary from Lincoln Cathedral, I came upon one from your blog. I am wondering if the images are copyrighted. I am working with someone who is doing a video associated with a song and he is considering using your image.
Many thanks.
Peace.
Peter De Franco+

Joy - Thanks for your various messages; the waves of goodwill and prayer carry us.

Peter - Your friend is welcome to use the photo.

Dear Peter,
Thank you for your kind offer. I am so grateful.
Peace.
Peter De Franco+