A wake of blooded feathers? 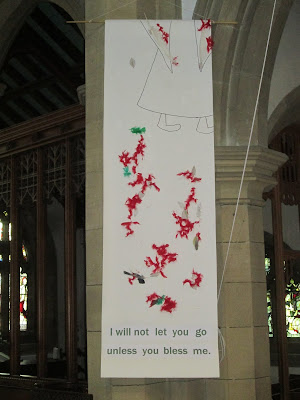 Yesterday morning at St Michael’s, Haworth, our first attempt at Covid-safe All Age Worship was a challenge.  Social distancing somehow trying to meet interactive worship.  Experimenting with the corporate worship just as degrees of local lock-down are about to be re-imposed.  Two dozen people did come.  Enough of them picked up the invitation to bring feathers, and two families were able to use them for a bit of banner making.  We had one household bubble putting glue on the banner from one side, opposite the other household bubble using gloved hands to fix the  feathers on.

Ahead of St Michael’s Day at the end of the month, we were touching on some of the Bible’s angel stories, including Jacob wrestling with an angel.  Jacob emerged with both a blessing and a limp, which is perhaps potentially a likely result of any genuine encounter with God.  I like the allusive nature of the resulting new hanging in church - the departing angel leaving scattered feathers in its wake.

“Empathy is costly.”  So said one of those I visited in the afternoon, reflecting on her emotional reaction to much of the news and the situation of people around us.  “If I didn’t feel so much for others, perhaps I wouldn’t be as anxious,” she was almost saying.  “Being humanly aware is never going to be emotionally easy,” might be another, possibly more positive, take.

Sympathy is in part what is implied by its linguistic root: syn-pathos - alongside the pain of another.  By contrast, empathy (although actually an early twentieth century English translation of a nineteenth century German psychological term) implies being en-pathos, in the pain of another.  So, yes, empathy is always going to painful; not just alongside someone’s pain, but in it.

Which might give me another very partial tool for explaining the story of God-in-Christ.  God is fully human in Jesus of Nazareth, so it is not strange that God being alongside us like that should be ultimately costly.  “Divine empathy is necessarily a journey towards the cross”?  So those created in the image of God should simply expect to detect some resonance of all this within ourselves?

Finally, touching base with a colleague this morning, we reflected together on the normality (rather than ‘strangeness’) of these times.  Like all the others brought up in relatively prosperous homes in post-War Britain, we came to assume the absence of war, isolation from discrimination, a stable climate, the protection provided by antibiotics and vaccines, freely available health care, a consensus around the concept of human rights, reliable pension provision, and networks of protective insurance. We came to assume a naturally secure context.

Which, of course, isn’t what most human beings knew through history or know around the world today.  What comes to us as ‘strange times’ alert us to what we should have always have recognised to be ‘normal times’.

I don’t know whether these three things hang together – emerging from the latest bit of struggle both fractured and blessed, feeling the cost of being attentive enough to others distress, finding the upheavals around us reveal what is normal for most people – chasing the scatter of almost blooded feathers (the colour wasn’t planned but came from the boa  donated at the service) behind the disappearing messenger from God.